April 20 - Ice is out and boats on the water.  Today air temp is 85, water temp is 42.  Pike are biting in swallow water near spawning areas. 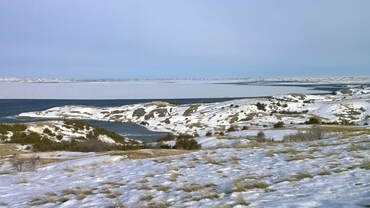 March 29 - Lake Oahe's elevation has increased about four feet over the past week or so.  This is due to large runoff coming from melting snow coupled with reduced releases through the dam.  Down stream flooding is the reason for the reduced releases.  The lake level is now as high as the peak last year.  The Corps is forecasting additional increases of another four to five feet over the next ten days.  The increasing elevations are expanding the shoreline open water areas when the water raises over previously dry land areas.  It is starting to reach last year's vegetation growth in some areas.  This should produce some quickly rising shallow water temperatures, which of coarse attract spring northern pike.  We have not seen anyone fishing the shorelines in this area yet, but may soon.  The main lake area is still iced over.
March 25 – It is heading into the last week of March, and around here there is much evidence of the long winter lingering through the hills and over Lake Oahe.  The lake is mostly covered with crusty to slushy snow and thick but not real solid ice.  Over the past week we have had thawing days and freezing nights bringing about a methodical thawing process.  Roads here are soft and muddy with running water.  The draws, low areas and tree groves are still full of deep snow drifts.  The melting snow has been running over frozen ground for the past week, but that is starting to change.  This warm running water is joining with the rising lake level to form slushy to occasional open areas along shallow shore line areas.  With a few days of sunny 50 degree weather, it might be possible to fish from some shorelines.  We have two of those days forecast for this week, and a couple more during the following week (first week of April).  We’ve seen robins and other spring birds, we’ve seen flocks of geese migrating north, we’ve seen brightly-colored turkeys strutting and rutting throughout the Pike Haven hills.  Spring is finally emerging.

Walleye fishing during 2018 was generally better than 2017, which was better than 2016.  We think that improvement will continue in 2019 with more and larger walleyes.  High water levels during 2018 contributed to walleye being accessible to fishermen throughout the summer.  The Corps of Engineers is forecasting high water levels again in 2019.  The walleye bite should start ramping up within 3 to 4 weeks after ice out, and continue to build until mid-summer.

A lot of northern pike have been caught in Lake Oahe over the past few years.  As a result, their numbers maybe down a bit.  However, determined and persistent anglers can catch a big trophy gator.  Best chance is right after ice out in warming shallow water.

Smallmouth bass are a great, yet under sought, option on Lake Oahe.  These feisty footballs often put their aerial acrobatics on display for the delighted anglers.  The smallie’s  spawning and annual patterns run a little later in the season than walleye, and they tend to stay in shallow water all summer long.  Easy to catch, a tremendous fighter, a great catch-and-release fish.

Catfish are plentiful in Lake Oahe.  They are easily caught throughout the summer, and put up a good fight.  Many people like eating catfish.  The Lake Oahe catfish are particularly tasty, and should be prepared without whiskers.

We will try to post info on the lake thawing progress and pike fishing results soon.